Teams and team formation are a fundamental part of any organization. But getting them right is far from trivial. And there are a lot of ways to mess things up. So it’s important to have a “correct” definition for them.

In my time at Bolt, I’ve been involved with managing, bootstrapping, and reorganizing my fair share of teams. I made all the mistakes. To save others from doing so I’ve written several internal guides. Now I’m adapting and publishing them for a wider audience. I believe the lessons are theoretically sound and should apply across companies and industries. Like the previous post on reading lists, this one is geared towards a manager audience. Nevertheless, working in a badly set up team is a world of difference from working in a well set up one. Hence even as an individual contributor, this knowledge is useful. You’ll know what to look for and what to avoid!

Here’s my best attempt at a short definition of teams done right - in tech organizations at product companies, the team is the unit of product delivery. It has a perennial lifetime in the organization. It has complete control over a product vertical. It has corresponding control over the engineering components. It consists of a small group of people working in a coordinated manner.

The Unit Of Software Delivery

The team is the unit of software delivery. Software in a business setting is a team activity. It is built and maintained and operated by teams of people.

In contrast, it is not individuals or squads that build software. Nor are large-scale structures like divisions or the whole of “engineering” that build software. These are not safe, sustainable, or efficient configurations for the long run. For one, a team can do more than a single individual and can think better than any one individual. On the other hand, a team can actually do something and does not get drowned by coordination and synchronization costs like larger groups do. 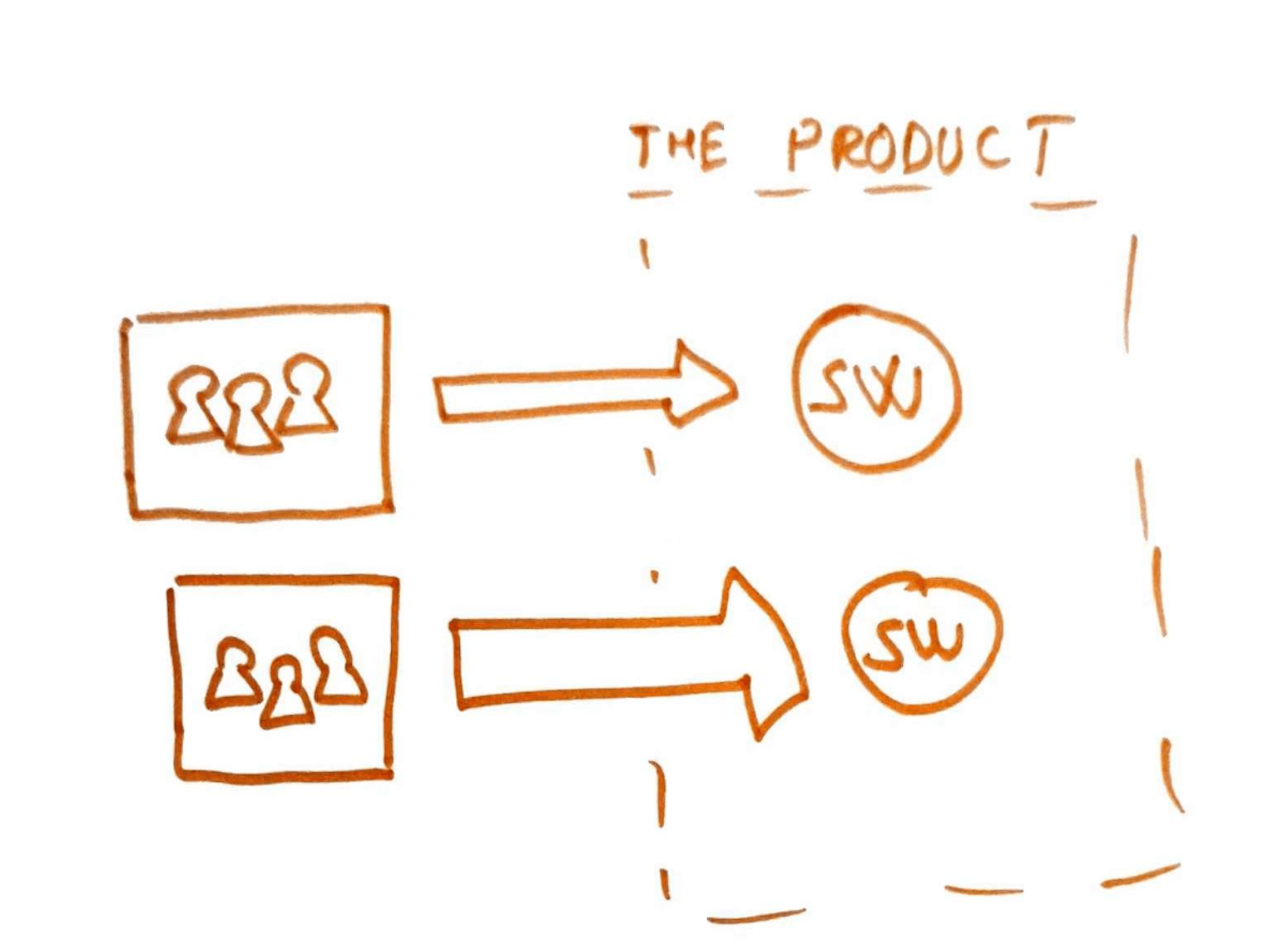 The team has a long and perennial lifetime in the organization. It abstracts away the individuals which compose it. Not in the sense of hiding them, but rather giving the rest of the organization a handle that withstands the movement of people, temporary issues, vacations, etc.

In contrast, you can go the short-lived project teams route. Or do swarming on projects, or try the consultancy model. But these are not teams in the sense above and should be used for specialized tasks.

Teams can start and end, but as long as we have a particular product need, we should have a team handling it. 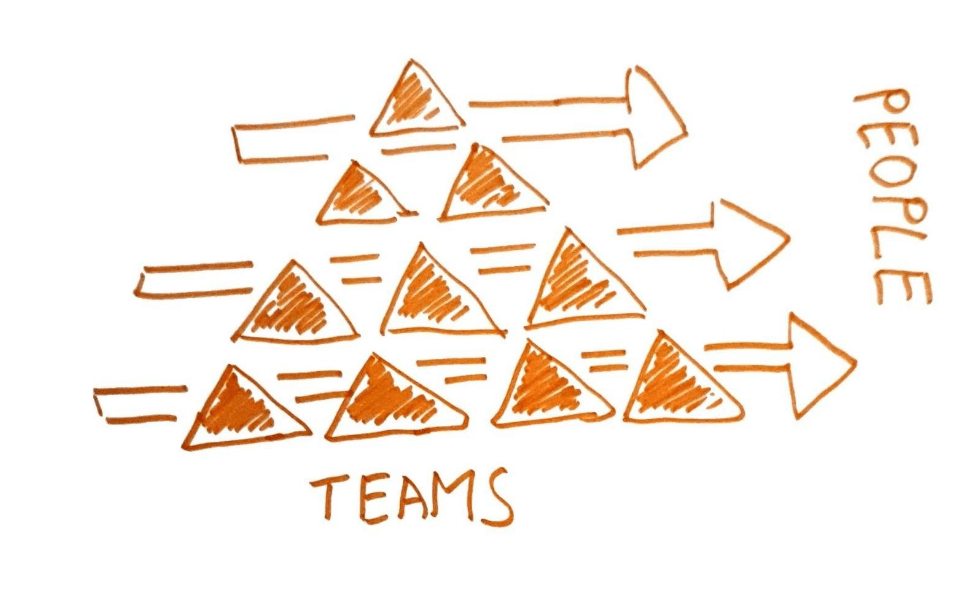 Complete Control Over A Product Vertical

The team has complete control over a particular product vertical. It can be a very narrow vertical, but it needs to be something distinct and non-overlapping with the other parts.

Control of a domain here means that the team is tasked with solving a particular problem and has the autonomy to set objectives, establish metrics, devise strategies, prioritize and execute, own vendor relationships, etc.

It is subject to limited oversight from the rest of the organization, mostly expressed as reviews, alignment to strategic objectives, budget/ROI constraints, etc.

In contrast, having a top-down approach to these aspects is not scalable, nor is it efficient. The higher levels of the org offer context and strategic direction, but should not manage at the level of a team. Ditto, shared or diffuse ownership is a recipe for trouble. When things are good folks are going to struggle to work on things, and when something goes wrong the hot potato will be passed along.

The effect we wish to achieve in the end is to minimize dependencies with other teams and maximize the ability of the team to work independently. When coordination is required, it is achieved by providing a service, rather than a tight “collaboration”. Amdahl’s law applies just as well to teams as it does to computers. 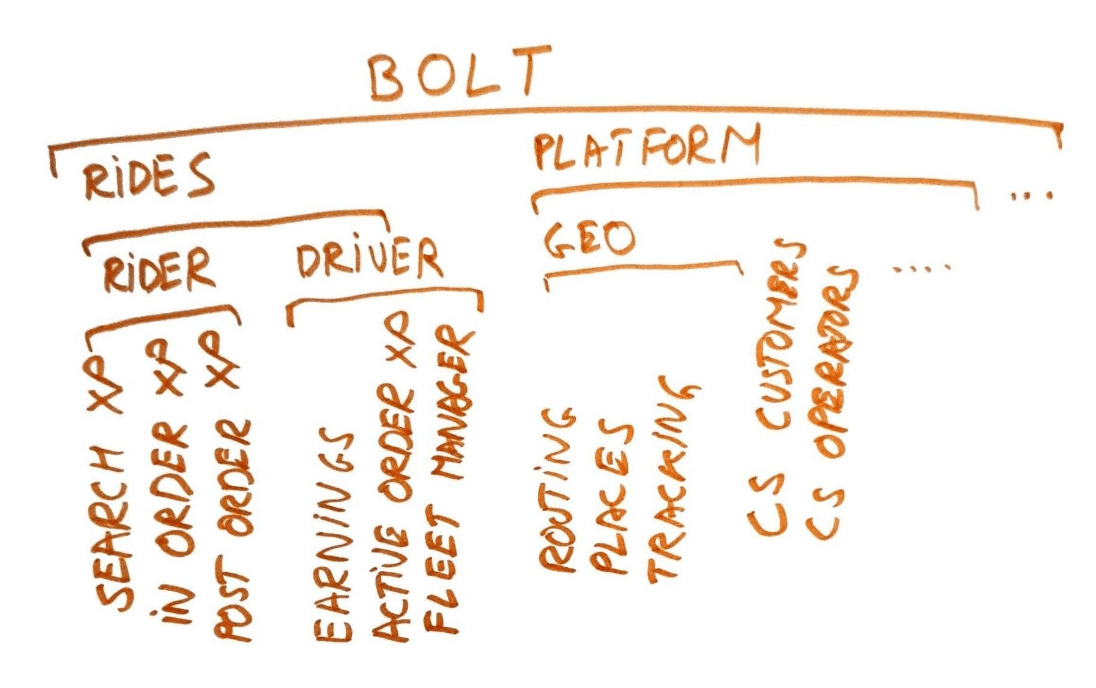 The team has complete control over the specific engineering-level systems that power the corresponding product vertical that the team owns.

Control of the domain here means that the team is tasked with building and operating whatever aspect of the product they need in order to meet their product objectives.

It is subject to limited oversight from the rest of the organization, mostly expressed as reviews, following best practices, using the common infrastructure-level tooling, aligning with wider architecture constraints , participating in migrations, etc.

In contrast, we do not want distributed ownership here, with specialized mobile or DBA or data teams working in a “consultancy” or “per-project” fashion. It does not scale, is not efficient, and is subject to bandwidth limitations of the provider teams. 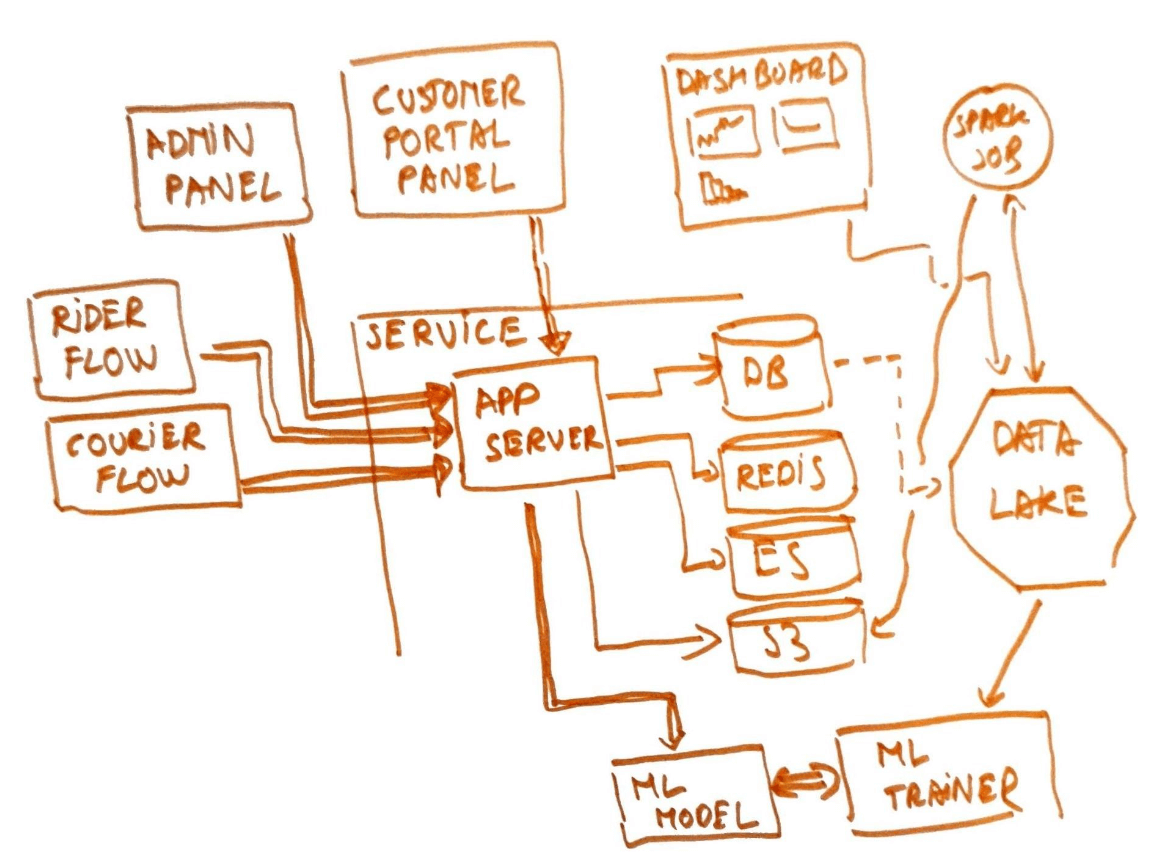 For example at Bolt, systems a team would normally own are:

All of the above are organised in ways which allow multiple teams to own separate sections of the codebase, even if they’re working in an otherwise monolithic system.

Given that, ownership here means that:

Depending on how a particular engineering organization is set up, there are some natural boundaries that crop up. One is towards the infrastructure layer as maintained by a “platform” or “tools“ group. Teams build their systems by using the tools provided by this group. Where they are insufficient there’s a discussion about going off the beaten path which may include explicit plans to contribute any developments back to the wider community. The other boundary is towards the product layer represented by more distant teams who code in an older monolith. In some cases, a team builds inside monoliths owned by other teams and needs to be mindful of that.

A Small Group Of People

A team is a small group of people working in a coordinated manner. The ideal team size is between 6 and 10 people . They can belong to multiple reporting lines, as long as they work together in a consistent fashion and consider themselves as a unit.

In contrast, if the team is too small it does not manage to have enough power, it is very susceptible to people movement, and it doesn’t accurately manage to provide an abstraction to the rest of the organization. On the other hand, a team that is too big is swamped by coordination costs, cannot effectively gel, and fights against human psychological limits. 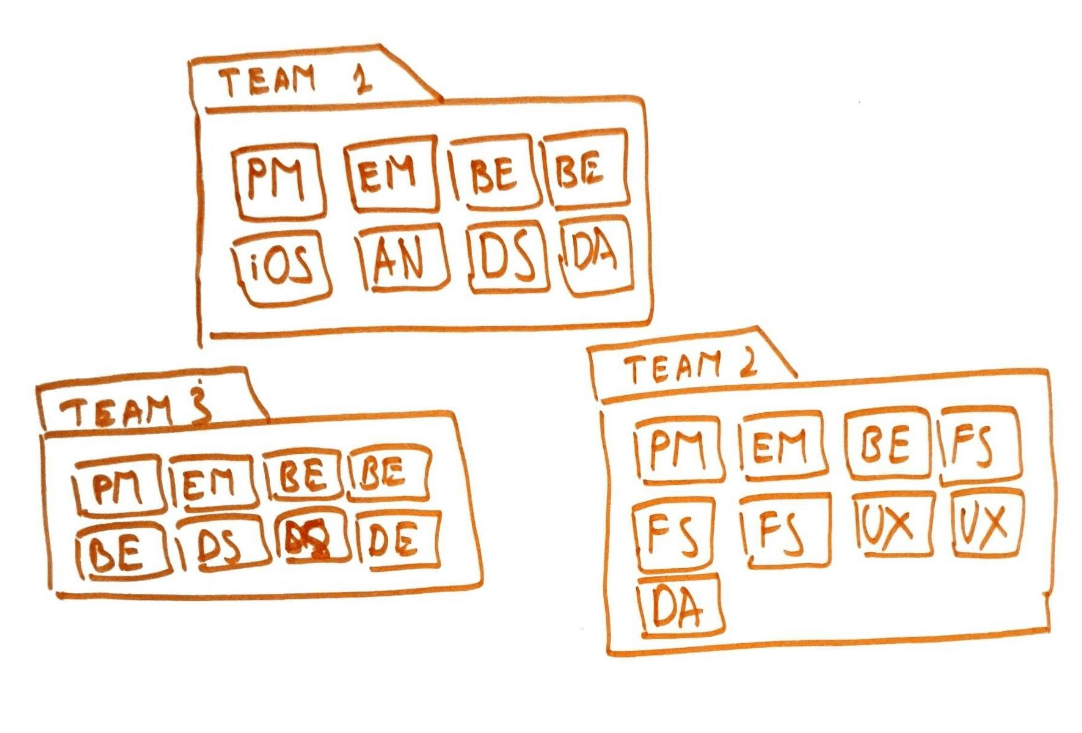 The reporting lines do not matter as much and it’s normal to have 2-3 of them completely separate up to VP or CEO level. What matters is that folks work as a team with all the attributes from above.

There’s a soup of responsibilities across the engineering and product spectrum, and while some individuals are primary owners of some, everyone has some shared ownership here! An engineering manager needs to care about the product direction, even if they’re not the principal owner of that, just as much as a product manager needs to care if a team member is having performance issues.

Overall the sum of these people should be between 6 and 10 people.

Even in this ideal discussion, we need to acknowledge some realities.

The guiding principle is that these specialized teams should be placed closest to where they are needed and evolve to move to where the needs are. Historically we have done the following:

The graph below shows via arrows the structural evolution of our organization and the four stages highlighted. 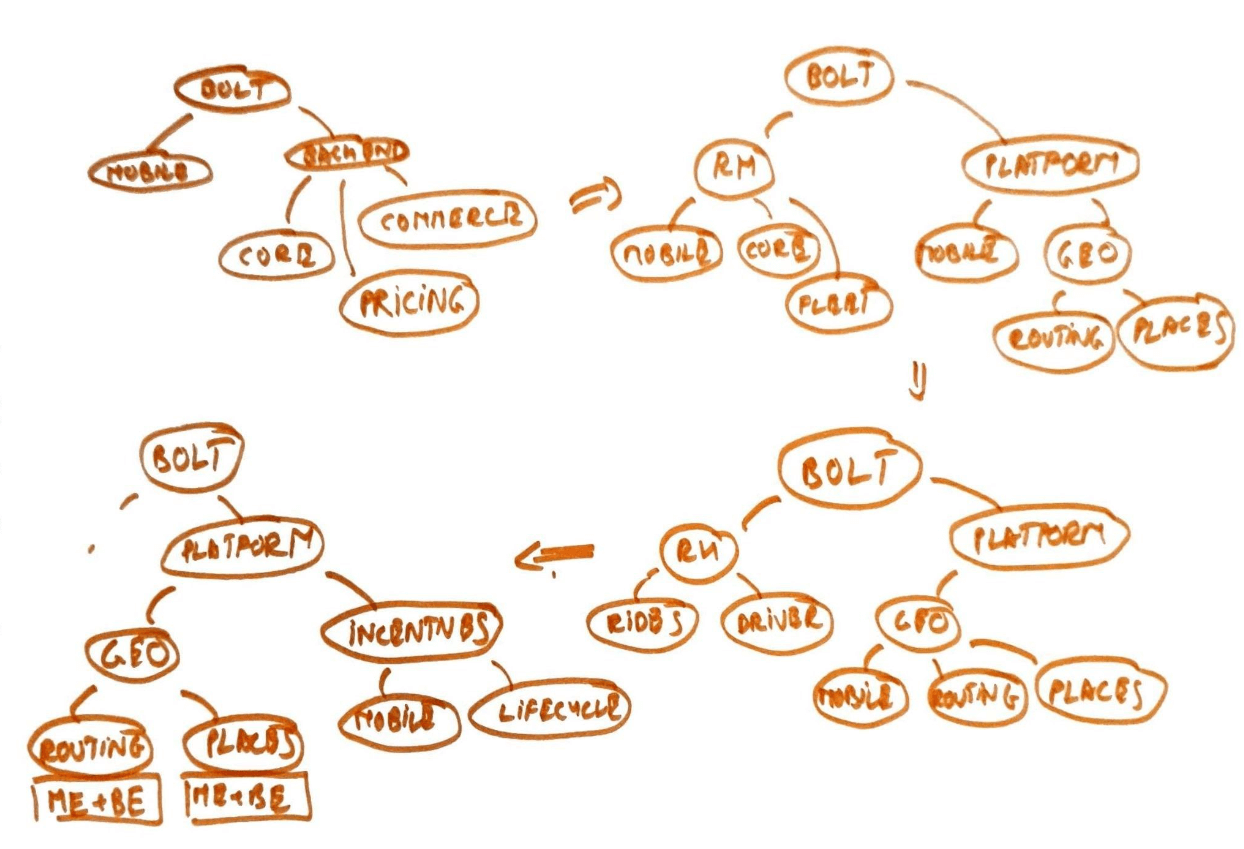 Other Types Of Teams

The above discussion assumes very much that we’re speaking about “stream aligned teams”. These are the classical teams that own a very narrow vertical of the product. Other teams one can find in an organization are “platform teams” or “complicated subsystem teams”. Regardless, most of the same principles above apply here. The book “Team Topologies” goes into more details on these other types of teams.

There you go! Quite a lot of material about teams. And there’s more for sure. Entire books have been written on the topic and we’re still not in a place where we’ve mastered this as an industry.

Here are some references for further reading:

I hope you found something useful in this post, and see you in the next one.